After a long time of silence am I delighted to present you a new version of Diodon. We have been moving from a xml clipboard storage to directly implementing Zeitgeist. This, first of all, brings a lot of changes under the hood e.g. clipboard storage is not limited by a number of items anymore but clipboard content can be stored theoretically infinitely. This will help us implement new features in the future. However, there are also some direct advantages for users which I want to introduce here. Please remember though when reading this post that this is still a test version. Things might still change and there are still open issues which I will mentioned at the end of this post. Also due to higher requirements in different libraries such as a newest Zeitgeist library (>= 0.9.14), we can not provide this new features for Ubuntu older than 13.10.

Diodon has been providing a Unity Lens/Scope integration for quite some time. However, it has been limited due to the fact that you could only search in a list of a maximum of 100 items. There is no such limit anymore which makes the Diodon Unity Scope much more powerful. Also it is now nicely integrated into the new Unity Smart Scopes with a preview and keyword search (e.g. start search with clipboard: or diodon: to search in clipboard history). For now you can find the clipboard history underneath the Info master scope. Unity Scope is still a Diodon plugin so package diodon-plugins needs to be installed and afterwards plugin Unity Scope activated in Diodon -> Preferences -> Plugins. 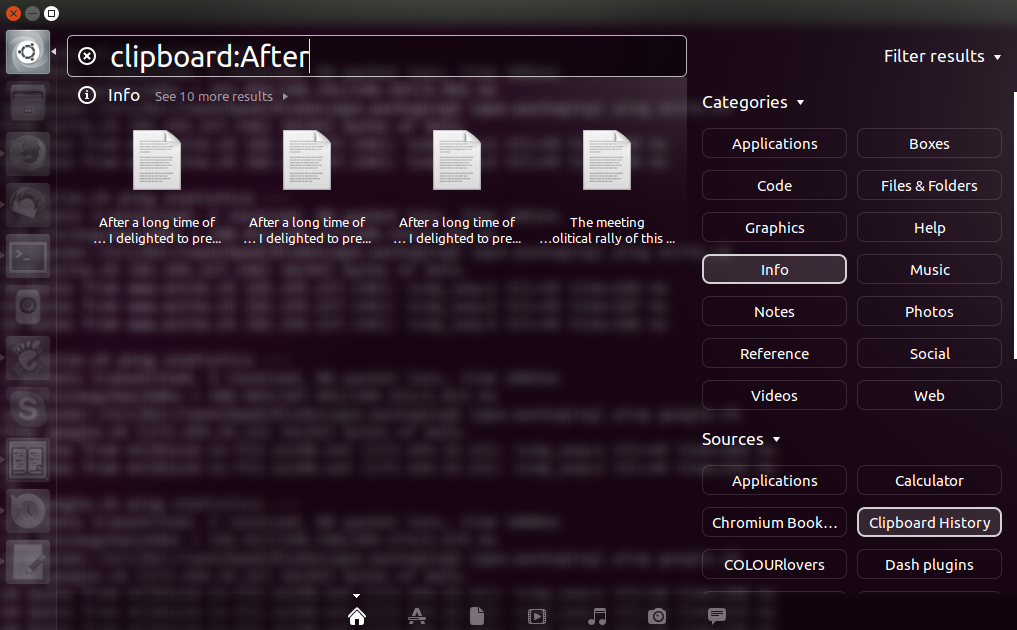 There has always been the feature to Clear the whole clipboard history. But what if you only wanted to delete the items recorded in the last hour or last day? With this new release this is now fairly simple by using the “Security & Privacy” component in System settings (Update: For non Unity desktop environments you need to install the package activity-log-manager and start the application of the same name). There go to the Tab “Files & Applications” where you find a “Clear Usage Data…” button. In the new dialog simply choose the desired time frame you want to clear. And voila job done… 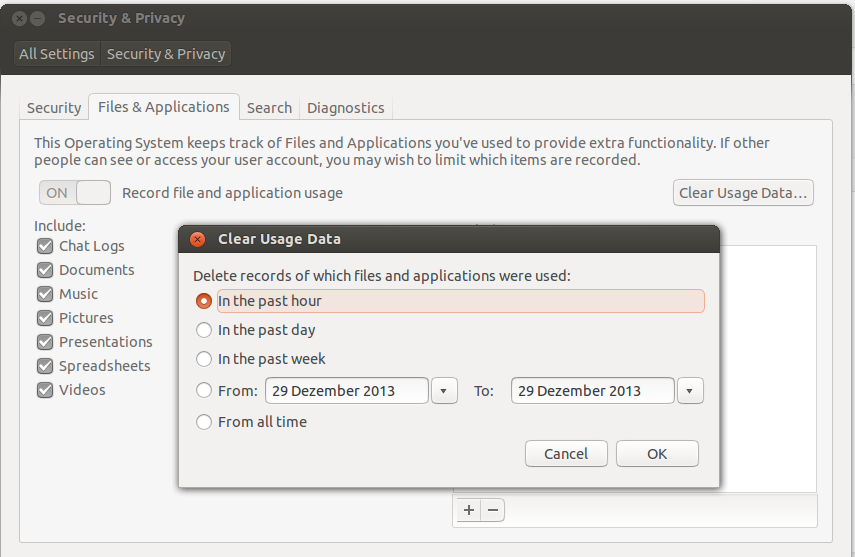 Exclude my Password Manager from adding items to clipboard history

Concerns have been raised that passwords copied by a password manager also get added to the clipboard history and remain there. If you have similar concerns then this new feature might be of interest to you. It is now possibly to exclude certain applications from adding items to the clipboard history. For this we also use the “Security & Privacy” component in System settings (Update: Or activity-log-manager for non Unity systems). There in tab “Files & Applications” simply add the application you wish to the Exclude list. Content of such application will still be copied into the clipboard but won’t remain in resp. added to the history.
Please note though that Diodon can only correctly identify native applications. This means that for example Java applications can not be excluded from adding to clipboard storage. We will see whether we can improve this in the future. 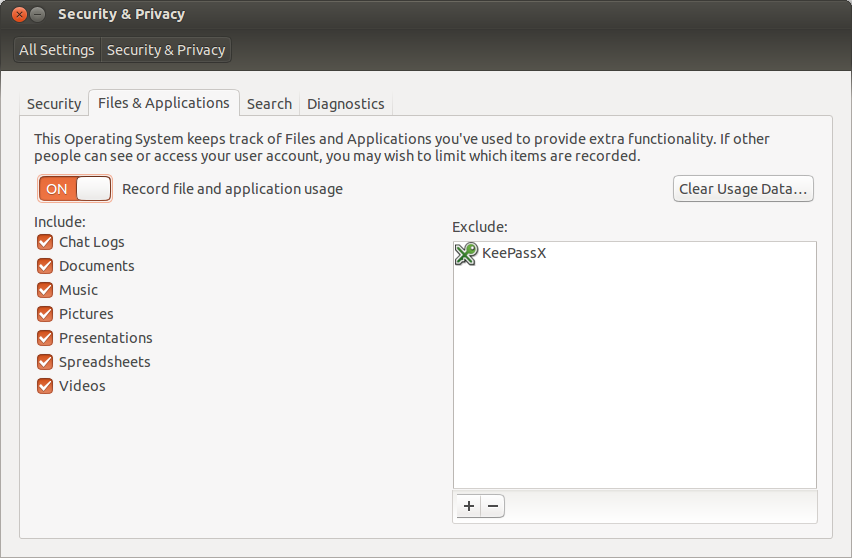 How can I install new test version?

As this is only a test version it is currently only available in the daily ppa.

Run the following commands to install it:

If you want to use the Unity Scope, do not forget to activate it in Diodon -> Preferences -> Plugins.

As said is this only a test version which has still issues. So if you find any bugs please report them.

Here is a list of known issues which should be fixed before the final release:

For developers and translators

There have been a few changes in different string used within Diodon. It would therefore be great if all translator out there could have a look and update their translation of expertise. Thanks in advance for your valuable work.

For developers of plugins please note that the API is not compatible anymore with older version however the changes are not major. Best have a look at the source code comments. If their are still questions as always can you contact us on IRC Freenode channel #diodon.

This site uses Akismet to reduce spam. Learn how your comment data is processed.